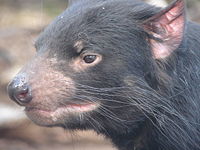 Next Meeting: We'll meet in a couple of days over a meal to discuss progress, but feel free to discuss a time if need arises!

We are interested in using cellular automata/agent based modelling approaches to investigate how a predictable increase of prey density (from roadkill) impacts the contact network dynamics of a group of individual foragers (Tasmanian Devils). We are interested in how the frequency at which devils interact (and with whom) scales with the ratio of prey density on roads to background levels. (Gavin Fay)

The context for this foraging work is that determining how supplementing the prey base (from roadkill) might impact the transmission dynamics of Devil Facial Tumour Disease (DFTD) among the devil population. Additional interests of ours are therefore related to modelling dynamics of infection within the network, which could also be connected with population dynamics models, and changes in life history traits (infected populations are now semelparous, with a large drop in age of sexual maturity).

Tasmanian Devils, the largest marsupial carnivore, are currently experiencing a dramatic reduction in population due to DFTD, a rather nasty infectious cancer which has become prevalent through much of the state. DFTD infection relies on transmission of infected cells from contact, most likely due to biting, which these critters do a lot of during mating and around prey carcasses. A hot conservation topic right now is forestry plans to build roads opening up a wilderness area in the north of the state to ecotourism opportunities. The devil population in this area has until now remained disease free. There are concerns that the road will increase the likelihood that DFTD will spread to the diseasse-free population: Devils are scavengers and frequently feed on roadkill, the creation of a road may then provide an opportunity for increased frequency of contact between infected and disease-free devils. It might be interesting to investigate how introducing a fixed-location source of additional prey items (ie a road) to a devil population would change the contact network for Devils, and then also to what extent the increased contact frequency would have to be to facilitate transmission of DFTD from an infected devil population to a disease-free one.

ABM approach - Model Devils as random walkers on a grid, that move diffusively toward prey locations. Use Devil densities from mark recapture estimates. Prey map is stochastic, with intensity of spatial process given by a base mortality rate. Parts of grid that are road have higher mortality rate (tunable ratio relative to base mortality rate). Keep track of who meets who, and how often. Build network, with weights of links driven by frequency of interaction. Analyse network structure when conducting simulations with/without a road. Other scenarios include, values for ratio of prey densities, how rapidly devils move toward prey, etc. (Gavin Fay)

Start off with random grid. Possible extensions could include importing GIS of parts of Tasmania for road locations. Approach above assumes that interaction occurs given same location - if we are going further with disease transmission etc, then we could have a probability of fighting/injury given an interaction.

The Basic model will NOT have disease, mating, natural death, etc. It will only have what is explicitly listed in this section.

Necessary Parameters whose ranges should be determined through literature:

There are few ways to approach the disease model. One way is to compare to tuberculosis literature as it has similar properties. Another is to find if there is literature on exactly how this disease propagates.

The goal in this version is to see how the disease spreads amongst the population, and how the density/location of prey affects the spread. Still not as realistic as we'd like as there is no natural death or birth.

This version would be built upon the disease model.

The goal in this version is to see how all of these different parameters affect the devil population, specifically in terms of the disease spread.

In terms of the mating model, I also read that you can have transmission of the disease during aggressive mating too, so that might be another interesting aspect to incorporate in the model: you have transmission by foraging and then you can have this extra layer of transmission where 2 individuals of opposite sex can meet in the grid and can get the disease from one-another. Might be interesting to see how this changes the dynamics of the model. Oana Carja

(Warning: some may find images contained within these papers disturbing)

Risk assessment of the Tarkine Drive (a little enlightening)