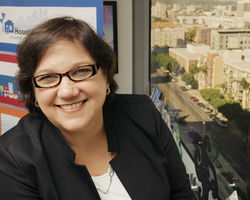 Helmi A. Hisserich is a distinguished leader in housing policy in Los Angeles an issue central to Los Angeles’ sustainability as an urban center. Ms. Hisserich’s expertise spans the commercial and public sectors, and over the arc of her career she has managed to advance policy and development under different administrations, and working with leaders with different priorities; remaining focused on broad City goals in the midst of constant change.

Since 2009, Ms. Hisserich has managed the Housing Development Bureau of the Housing & Community Investment Department of Los Angeles (HCIDLA). In this role she oversees the City’s Affordable Housing Development Program, including multifamily finance, first time homebuyer loans, residential rehabilitation, housing preservation and management of the City’s $1.9 Billion affordable housing loan portfolio. During her tenure the department has financed over 10,000 Units of affordable housing. Ms. Hisserich works with leaders in all levels of government to address the affordable housing needs of the City of Los Angeles. She also works closely with affordable housing developers, financial institutions, and homeless and housing advocates in the City of LA.

Prior to joining HCIDLA, Helmi served as Deputy Mayor for Housing & Homelessness in the Administration of Los Angeles Mayor Antonio Villaraigosa, and she served as the director of redevelopment in Hollywood California, where she was the City’s lead negotiator on commercial, hotel and residential projects during a time of tremendous community change. Ms. Hisserich earned a BA in Comparative Literature from the University of Southern California, and she earned Master’s in Business Administration from Cornell University in New York. In 2011, Ms. Hisserich attended Harvard Kennedy School of Government program for Senior Officials in State and Local Government. And in 2016 the Durfee Foundation awarded Ms. Hisserich a $100,000 Stanton Fellowship to support her thought leadership on major housing policy issues facing the Los Angeles Region. Ms. Hisserich is a native of Los Angeles; a leader in the LGBT community; she lives with her wife and daughter in Silverlake neighborhood of LA, where she grew up.