Foraging on the move

Many animals (e.g. caribou, wildebeest) forage in groups while moving from one location to another. This means individuals have to simultaneously balance several demands: finding the best resources, maintaining the cohesion of the group, and migration in a certain direction. While there is a vast literature on both flocking and optimal foraging, there has been no work done to understand how animals should trade off the decision to flock or forage (since it is difficult to do both simultaneously) during migration. We develop an individual-based model to address this, and implement a genetic algorithm to find the best decision-rule for switching between foraging and flocking, under a variety of conditions.

GROUP LIVING: Animal groups are ubiquitous in nature and their formation comes with both costs and benefits. Groups provide individuals with a lower per-capita predation rate (dilution effect), shared information, and allow individuals to find both mates and resources more easily. However, groups tend to attract predators more easily than solitary individuals, can increase the transmission rate of diseases, and lead to competition for resources. In theory the size of an animal group should be determined by the payoff to an individual; at equilibrium group size, the benefit to an individual of joining a group should be equal to that of being a loner. An individual's specific position within a group can have significant fitness consequences (see Krause 1994); individuals in the center of the group are often the safest from predation (Hamilton 1971), but those on the edge are in the best position to discover and exploit new food resources [ref].

FLOCKING & FORAGING: There is a vast literature on flocking/swarming models (e.g. [refs]), and on optimal foraging behavior (e.g. Fretwell & Lucas 1969, Schoener 1971, Charnov 1976). Some theoretical work has been done on combining foraging and flocking, but this mostly relates to what has been termed "social foraging" (see Giraldeau & Caraco 2000) and examines how how individuals can gain information about foraging locations by flocking (e.g. Clark & Mangel 1984) or on how foraging strategy should vary with respect to location within the flock (Barta et al 1997). However there is no theoretical work on how foraging individuals should behave when they are in a group that is collectively moving, a behavior seen in wildebeest, caribou and many other species of migratory ungulates. Individuals in this situation face a trade-off between foraging and keeping up with the group. Individuals that fail to forage will starve, and those that fail to keep up with the group will likely be picked off by predators [ref]. This leads to a a mixed behavior at any moment, where some individuals are concentrating on foraging and others on flocking and moving towards their destination (e.g. Planet Earth video).

MAMMALIAN MIGRATION: A recent literature review found that the majority of papers that model migration focus on birds and fish, with almost no work done on modeling mammal migration (Bauer et al 2009). The only two papers from this review that modeled terrestrial mammal migration are:

WILDEBEEST: Wildebeest in Tanzania and Kenya move in a roughly circular clockwise direction, likely following the vegetation and rainfall across the seasons. During the dry season (May-Oct), they are found mostly in the north, and move southward as the rains start, and give birth synchronously in Feb/Mar. There is a rainfall gradient (and corresponding vegetation gradient) across the region with high rainfall in the northwest and low in the southeast. (Boone et al 2006)

CARIBOU: The search for food is one of the primary drivers of caribou migration. Caribou winter in areas with a large amount of vegatation biomass (mostly lichens). In the spring they move north towards areas with seasonal vegetation that is rich in nitrogen and minerals (necessarily for rapid growth and milk production), where they give birth. In Aug/Sept as the vegetation gradient becomes less pronounced, the herds disperse in small groups, coming back together only at the end of the growing season, to migrate back south, as lichens in the wintering area become the best source of energy again. (Fancy et al 1989)

Fancy and White (1987) found that caribou were the most efficient walkers (lowest net cost of locomotion) of all ungulates tested. Wildebeest were second most efficient, suggesting that migration is an important selective pressure on locomotion efficiency.

We created a NetLogo model to understand the balance of flocking and foraging behaviors in animal groups as they migrate. The base of our model was the NetLogo demo model (Wilensky 1998) which is based on Craig Reynolds Boids simulation (Reynolds 1987). The boids model assumes that an agent within a group moves based on two main rules. If there are other agents within a minimum separation distance radius, then the agent will turn to move away from these agents ('separate'). If there are no agents within the first radius, then the agent will align with ('align') and move towards ('cohere') any individuals within a second, larger radius ('vision'). To simulate migration, where animals are moving together in a specific direction, we add another movement rule: after agents separate, align and cohere, they also all turn towards 'north' (positive y-direction).

Figure 1: Shows an illustration of the flocking rules for one focal individual. Panel A demonstrates separate and B demonstrates align and cohere. The solid circle around the focal individual is the minimum separation distance, the larger dashed circle is the vision, and the arrow represents the heading.

We modified this basic flocking model by also including a foraging aspect. All agents in our model have an energy level that decreases as they spend energy moving, and increases as they acquire energy from foraging while stopped. At each time-step, every agent has to make a decision whether to forage or to flock. (Since animals such as caribou forage with their heads down, making it hard to see fellow herd-mates, we assume that it is impossible to forage and flock simultaneously.) We assume that agents make the decision of whether to flock or forage based on a simple threshold: if an agent's energy level is below a certain threshold (ForageT) it will start to forage, and if the number of agents within an agent's vision radius falls below a certain threshold (FlockT), it will start to flock. In the case where an agent is below both thresholds, we assume that flocking overrides foraging. If an agent decides to forage, it stops and increases its energy level by E_forage. If an agent decides to flock it follows the movement rules described above (separate, align, cohere, and move north), takes a step forward, and decreases its energy level by E_move. Agents can die in two ways, essentially from doing a poor job foraging or flocking. If an agent's energy level falls below a certain threshold, it 'starves' and dies. Agents have some probability of dying from 'predation', which is a function of the number of other agents it can see.

We implemented a genetic algorithm type method to determine the optimal threshold values for agents. For a single run, N agents are created, each with a set of ForageT and FlockT threshold values drawn from a random distribution. The simulation is run for a single generation (which ends whenever either 20% of individuals die or 150 time-steps pass, whichever comes first). At the end of a generation, N new agents are created and the simulation is restarted. Each of these N agents gets its ForageT and FlockT threshold values from a single 'parent' -- one of the surviving agents (those that have not died from either starvation or predation) from the previous generation. These threshold values are inherited with a slight mutation rate (3% each). This process is repeated for 100 generations.

PLOTS: Here are the results from our early July simulations (10 replicates for each combination of energy and population size) ... not particularly interesting, but good for reference 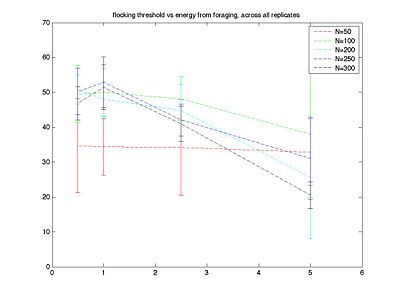 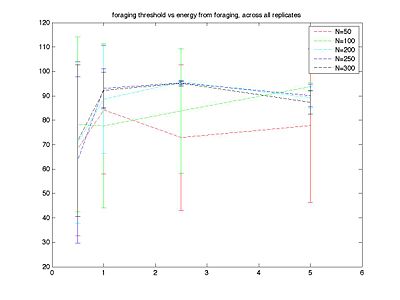 The simulations with the parameters above are still running... probably will take more 3 days to finish. I learned from Allison that if we want to do repetitions, we have to write them explicitly, example for 5 repetitions: 'repetitions [1 2 3 4 5]'.

Here is a list of the different simulations that have being done. Please post the date of simulation, parameters, output files and data analysis plots. 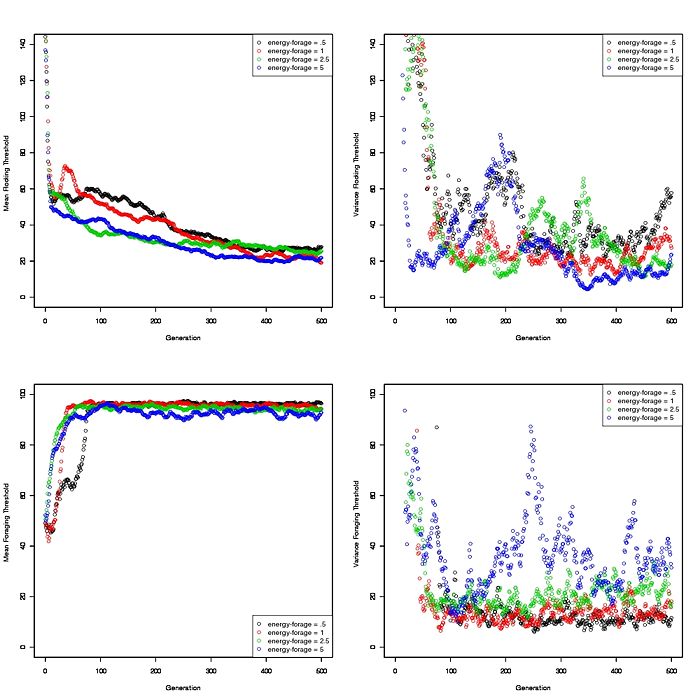 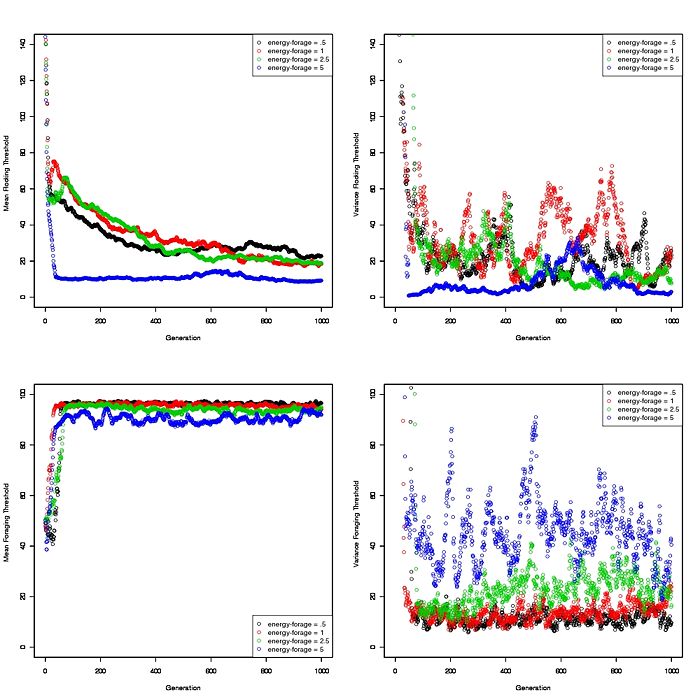 For detailed descriptions of each version, see the header of the code.

maybe have agents die from bad-flocking when too few individuals in their sight radius (instead of none)
Your sigmoidal forage-probability curve has threshold at 0.5 energy units. If energy-move is large compared to this value (and you currently have it at 0.3 by default), it will take only a couple of steps to go from 'stomach full' to 'dead'. Why there are no flocking deaths I don't know. SteveLade 04:17, 24 June 2009 (UTC)

should decision to forage be independent at each time step or are foraging individuals more likely to keep foraging than to start flocking?
Have behaviour rules but currently no hysteresis for foraging SteveLade 04:59, 25 June 2009 (UTC)

Allison Shaw: Many animals forage in groups while moving from one location to another. This means individuals have to simultaneously balance several demands: finding the best resources, maintaining the cohesion of the group, and in some cases moving in a certain direction. Can we develop an agent-based model with a simple set of individual movement rules that would allow for all these demands to be met?

This was inspired by a piece of Planet Earth footage on caribou: go to http://dsc.discovery.com/convergence/planet-earth/video-player/video-player.html, scroll down in the video clips to "Planet Earth: Plains: Following the Caribou" and watch the dynamics at about 1:30-2:00. (If anyone has a hard copy of this segment or knows how to get one, please let me know!). In this case each individual caribou pauses to eat along the way but the group never fragments and in fact it seems to almost 'flow' through an area. My guess is that one of the physicists could provide some interesting insight on how to model this.

Daniel Wuellner: Cool idea. Most importantly: I actually brought the Planet Earth DVDs with me which I'll happily lend; maybe we can organize a viewing w/ a projector somewhere.

I think there's some swarm literature out there for ideas on rules you could extend to incorporate foraging (or any other caribouish behavior). The one I know is Flocks, herds and schools: A distributed behavioral model (this actually might be the 'original' swarm paper).

Kate Behrman: I also interested in this. One possible extension could be to consider how the structure of the landscape between the two locations affects the movement of the group.

Murad Mithani: It sounds similar to what happens when the cognitive processes are focused on a particular problem to come up with ideas. The initiation of problem solving is a conscious mechanism that flourishes when that initial push is taken away. If you guys are planning to model this in some way, count me in.

Steven Lade: I like the sound of this too. Dare I suggest a meeting, perhaps one lunchtime, to flesh out plans a little more? Allison, since it was your idea, would you like to call it?

Allison Shaw: Sure, that would be great! How about lunch tomorrow (Tuesday the 16th)? Let's try to synchronize sitting together. I talked to JP about doing a Planet Earth showing and he said we could use the projector for the lectures, but we'd need to get a decent set of speakers (as far as I know there isn't a working TV/DVD combination in any of the lounges and we'd have to pay to use the more advanced media system in the lecture room).