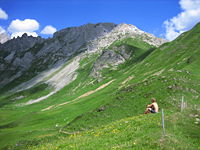 Hi everybody! My name is Felix Hol, I am a PhD student (biophysics) in the labs of Juan Keymer and Cees Dekker at the Kavli Institute of BioNanoscience, Delft university of technology (the Netherlands).

Among many other things, I am interested in and currently work on the role the spatial distribution of populations has on determining evolutionary computation in two separate systems: (1) metapopulations of bacteria adapting to dynamic landscapes of antibiotic challenges, and (2) metapopulations of genetic algorithms adapting to perform a classification task.

In my experimental work with bacteria, I observe metapopulations adapting on-chip to temporal and spatial fluctuations of antibiotics; I compare the behavior of a single, monolithic population in a single homogeneous habitat versus a spatially structured heterogeneous metapopulation. I compare them in terms of their adaptability to the landscape, their robustness, and the rate at which evolutionary innovation confers antibiotic resistance on the cells.

In the computational part of this work I implement genetic algorithms with different population structures (monolithic and distributed metapopulations) to evolve cellular automata task-performing rules. I think this maybe could be a nice CSSS project...

While browsing through what the CSSS faculty actually work on, I found out about the work of Iain Couzin on collective animal behavior. This made me think of vortexes and other modes of collective swimming that bacteria show under certain circumstances (e.g. high density). I'll formulate my ideas a little more thoroughly later; but I think it would be interesting to see whether the models describing the motion of for example fish schools would explain something about the collective motion of bacteria. Is there be a big role for chemotaxis, is it hydrodynamics...?

I am very interested in the interplay between ecology and evolution. Motivated by Sewall Wright's seminal 1932 paper I would like to investigate the effect that metapopulation formation has on the speed of evolution. The computational model to investigate this could be based on work by Mitchell & Crutchfield (and coworkers) where a genetic algorithm evolves a population of cellular automata to perform a certain task (see this paper). I propose to embed population structure in the genetic algorithm (GA) and find out what effect this has on the capabilities of the GA. One way of doing this might be to (bluntly) define subpopulations that cross breed at specified intervals; but I am sure that there are much more elegant/sophisticated ways of embedding structure. Some (wild) ideas for this are: putting them on graphs or lattices (with or without vacancies/movement)…. Any suggestions are greatly appreciated! (also other ideas for modeling stuff like this (evolutionary game theory etc..) are welcome)