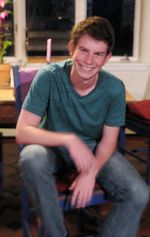 Elijah Andes: My Story
I grew up in the country. Or, as is more relatable to my fellow New Mexicans who've been to the more rural parts of the state, a sea of dirt and rocks with the occasional Juniper tree. My childhood was fairly uneventful, as most childhoods are, I presume. It seems to me that the best childhoods are the uneventful ones. I grew up trying to climb sandstone rock formations, which was more often than not an exercise in futility, and lying beneath the few trees we had on our land. We had a cat and a dog that accompanied me in my rompings that I was friends with, and one dog that almost bit off my face when I was three-ish that wasn't my friend. Our neighbors had a horse that I loved to visit, named Blue, that was my friend, and coincidentally, a dog that almost bit my arm off that wasn't my friend as well. I completed kindergarden at the Atalaya school, and then skipped first grade to attend second grade at the Santa Fe Waldorf School, where I've been at ever since. When I was about the age of eight, we moved into the city, to a house that was about five minutes from school. Although I appreciate not having to make the hour long drive into town (even more so now that I'm driving) there was something about living in the country, about having the nature we so take for granted and abuse at my fingertips to love. Elementary and middle school were fairly uneventful. I didn't do much, besides dodge thrown rocks a few of my more pugilicious classmates would throw at me for fun. Yeah, I was that kid. High School, on the other hand, was a different matter entirely. Most of my classmates left, and for the first time, I came into my own. I'm an artist at heart. I say that, and immediately people ask me to draw them. Well yeah, I can draw. I've drawn forever. But I also consider pretty much everything art. As Einstein said, “creativity is intelligence having fun.” I agree. So, I took to highschool with the mentality that, if I could make my academic pursuits as creative as drawing, they would not only be thought provoking but would also provoke me to be the best I could. These revelations came after a rocky sophomore year, where I cared less about academics and more about pushing graphite on paper. It wasn't until then that I realized that without an intellectual side to my creativity, my creativity was worth nothing. Eventually, I got to senior year, and wrote a thirty page thesis paper exploring the ideas of intelligence and creativity in modern and contemporary art. Currently, I'm finishing up classes at my school, and plan to attend either Austin College or the Kansas City Art Institute during the fall of 2014 and presumably until graduation from one of those institutions. There's no doubt more I could tell about my life, and there are surely formative moments of my life that I've left out of this quick biography. But a page and some is already to long, so I'll leave it to this. -Elijah