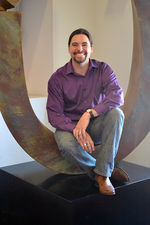 Drew hails from New England where he grew up in New Hampshire and Maine. Drew earned a Bachelor's degree in Business Administration from the University of New Hampshire. Upon graduating, he became a CPA and moved to Portland, Maine where he worked in a regional accounting firm as a taxation consultant. After some years there, he was seeking a change and entered the University of Maine School of Law, but after volunteering with some youth organizations in Portland, Drew decided that he'd rather try his hand at teaching than at lawyering. He started teaching both middle and high school math at Waynflete School in Portland in 2001, and in 2006, he and his lovely wife Tara moved to Santa Fe. Since arriving, Drew has taught at the New Mexico Academy for Mathematics and the Sciences, the Academy for Technology & the Classics, and since 2010, Santa Fe Preparatory School. In addition to teaching, Drew runs Santa Fe Prep's Mathcounts program and is the Director of the EE Ford Summer Teachers' Colloquium, a professional development program that draws teachers from around the country.