2) I hope to gain a basic understanding of modeling complexity, and how this approach can be applied to questions in evolutionary biology.

3,4) Projects - I have nothing that I'm commited to. A fun interdisciplinary project could be a gene-culture co-evolution project, with differing degrees of coinheritence of genetic and cultural traits.

5) Ask a scientist from the future - 1) In most countries, is science primarily publicly or privately supported? 2)What is (are) the major energy source(s)? 3) What are the outstanding question in evolutionary biology? 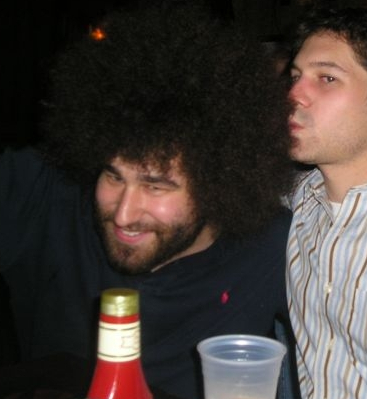 I (left above) am a student of evolutionary genetics. Born in Jerusalem, Israel, my folks moved to Detroit, Michigan, USA when I was young. After graduating from College of the Atlantic in Bar Harbor, Maine, USA, I moved to Mike Wade's lab at Indiana University's Department of Biology in Bloomington, Indiana, USA to pursue a PhD.

I am generally interested in evolutionary biology. (Marginally) more specifically, I am interested in the evolutionary importance of interactions between genes / individuals / species. Key words that attract my attention include: epistasis, genetic conflict, levels of selection, and population subdivision. Topics I have seriously thought or written about include: genomic imprinting, transfer of genes from the mitochondrion to the nucleus, and the coevolution of competition and policing behavior.

I hope to expand and build upon these interests over the summer, and am excited to learn from you guys with different backgrounds / interests.