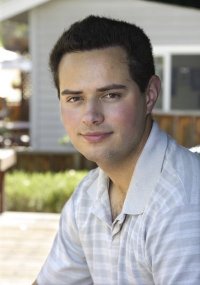 Victor Quintanar-Zilinskas is a graduate student at the University of California, Irvine. His current research focus, linked with the experimental results of his collaborators Xiangmin Xu, Ron Frostig, and Raju Metherate, is system-level dynamics and information processing in many-neuron (on the order of 1000s) networks. His advisors are Zoran Nenadic and SFI faculty member Arthur Lander.

Over the next five years, Victor intends to turn the focus of his network modeling to the study of 1) the information-processing consequences of the brain's frequent brief episodes of self-organized synchrony between groups of neurons 2) the potential for cognitive utilization of information generated by complex dynamics (Turing patterns are an illustration of such generation); what he will learn this summer at SFI (from both modules and peers) will be highly applicable to the pursuit of these topics. The latter topic is particularly difficult to study, but information-generative modeling and olfactory computation results are likely starting points of reference.

Victor was raised in Palo Alto, CA and his interests and outlooks are heavily influenced by his upbringing in Silicon Valley's technoculture. He double-majored in math and biology at Santa Clara University (class of 2009), where he did his first computational neuroscience research, sparking his current interests. He also worked with Geoffrey Bowker (who was, at the time, at Santa Clara University) to characterize the work practices of scholar communities that study complex systems (e.g. networks of ecologists that study various facets of the same ecosystem); it was while on this project that he developed his appreciation for the study of black swan emergence events (e.g. shifts between stable states of the composition of an ocean bacteria population; large storms). Victor's current "applied philosophy" interest is the connections between Constructivism, creativity theory, and interdisciplinarity.