Hey there! I guess I should introduce myself here. 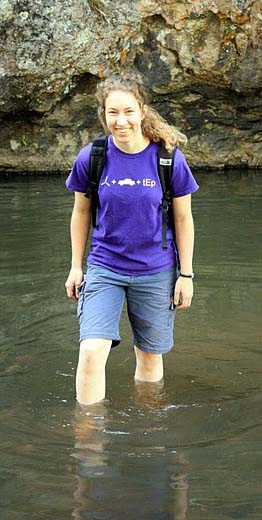 Playing in the river, first weekend of CSSS. (Photo by Bogdan.)

I've just finished my third year as an undergrad at MIT.
I like math and computer science because they make sense, and I like studying people because they don't make sense.
I like things that are logical. Sometimes I have strong opinions but they can change easily. I try not to have definite beliefs. I do things because they're fun. I enjoy philosophizing and arguing. I'm not particularly interested in saving the world.
I like wandering and walking, looking at things, climbing on things. Sometimes I like people. Occasionally I say things.
I'm interested in how language works, in how people can tell what other people are thinking, and in how people can learn complicated things starting with not much prior information. I'm majoring in cognitive science and computer science. I don't know what I'm doing after college.

I'm going to SFI because it sounds like there are a lot of smart people doing interesting research there.

My email address is akenney at mit.edu.

I'm from Oakland, California. I have never been to New Mexico, and before learning about this program I had never heard of "complex systems" as a field of study.

I like science because I like figuring out how things work and coming up with solutions to problems. The idea of people has always been interesting to me, because you are constantly learning things and making choices and interacting with the world, and there are so many factors involved, there's no way you'd be able to explain it, yet somehow most of it is so easy that you don't even notice it. I'm particularly interested in language: as a baby, every person hears a very different set of sentences, but we all end up speaking almost exactly the same language. And we can pretty much always tell what other people are talking about, even with all kinds of ambiguity and noise.

When I was four years old I wanted to be a construction worker when I grew up. Then I started school, and after a while I decided I wanted to be a mathematician -- though I think it was in the same sense that normal kids want to be a princess or something: it didn't occur to me that they existed in real life. For a while I wanted to be a professor, but recently I've been told that professors spend most of their time doing boring stuff that isn't research or teaching. I almost wish I could just stay an undergrad.

I've worked on a few research projects at MIT, related to various aspects of language and social cognition:

At SFI I want to experience what research is like other than at MIT, and get to know people whose fields of study aren't directly related to mine. Hopefully I'll accomplish something productive, and maybe get more of an idea of what I want to do for the rest of my life.

To learn the lexicon of a language, children must learn not only a mapping between words and meanings, but also the sets of particular words and meanings to which the mapping applies. For both words and meanings, the ones actually used in a language are a small subset of all the ones possible, and the exact meanings are never explicitly specified but must be learned from examples. Because the real world is noisy, the word forms and meanings inferred by a learner might not perfectly match those of the speakers he learned from. The imperfect transfer from speakers to learners is therefore a mechanism by which language changes over time.

In this project, I will use agent-based modeling to simulate lexical change. The meaning of a word will be represented not as a single definite referent but as a distribution over a 'meaning space'. Learners will hear words uttered individually within contexts (in which some but not all of the situational features are relevant to the meanings), and they will learn the meanings by generalizing from the examples they experience. In this way, word meanings can change gradually by moving within a continuous space, as they do in natural language.

Elais's story about Stefany and Damián: The American Journey.