I'm Stephi, and currently working as a Postdoctoral Fellow at The University of Western Ontario in London, Canada. This is my first postdoc appointment since I finished my PhD in late 2008 at the University of Goettingen, Germany.

My PhD research focused on biodiversity and ecosystem functioning relationships in forest habitats, e.g. the role of tree diversity for above-ground insect herbivory. Information is lacking on how these relationships are altered by both, plant and animal invaders, and how below-ground processes interact with the patterns observed above-ground. It is unclear how invasive plant and animal species alter food webs and soil properties in forest ecosystems, and how this impacts the current and future distribution of plants and the associated animal communities.

Furthermore, the role of climate change in invasion and also ecosystem functioning is unclear. Many exotic species arrived years or even centuries ago, but only more recently became invasive. One possible reason for this might be climate change. Higher winter temperatures allow for a range extension of previously introduced species or their hosts, thereby shifting and altering communities and their functions.

I want to investigate how climate change affects invasive species and their potential future distribution and competitiveness with native species in various terrestrial ecosystems. Potential native natural enemies and predators are also affected by the same temperature regimes, but might differ in their responses. On top of this, microhabitat conditions might buffer or enhance climate change induced macroclimatic effects (e.g. temperature experienced underneath bark), and could be crucial for predicting and modeling future distributions of species exposed to these conditions.

For my postdoctoral project, I am currently investigating the impacts of microclimate and climate change on the distribution of the Emerald Ash Borer (Agrilus planipennis), an invasive wood-boring beetle with devastating effects on the North American ash population which has lead to large ecological and economical losses in recent years.

I also have a bunch of non-academic interests, just to mention a few: Knitting (obsessively), crocheting, cooking, hiking, and more recently, collecting fossils and baking cupcakes.

The sort of expertise I'm bringing to the group:

I have a good knowledge of everything bug, forest, and community ecology related. I also love working and playing with R and have developed a decent skill set using the software, in particular for making graphs. If you ever wanted to knit your own moebius strip, I can show you how :p

What I hope to get out of the CSSS:

Getting and idea about different approaches to the modeling of different complex systems. Learning how to integrate very different types of data and to make sense of it as a whole- hopefully leading to some useful conclusions and predictions. Learning how to critically evaluate models- what do they *really* tell us?

Any possible projects I have in mind for the CSSS:

I'm interested in constructing bottom-up models of the potential distribution of invasive species based on experimentally determined physiological data combined with macro- and microclimatic conditions measured in the field and with regard to predicted climate change. The more I think about my work, the more I'm also getting interested in the role people play in the dispersal, introduction and prevention of invasive species, and I would like to come up with a model that incorporates socioeconomic data with the above mentioned, to be able to inform policies, make risk assessments and come up with pre-emptive measurements for regions at risk, such as the North American Arctic.

I also really like birds, and this is me feeding a little chickadee with sunflower seeds. 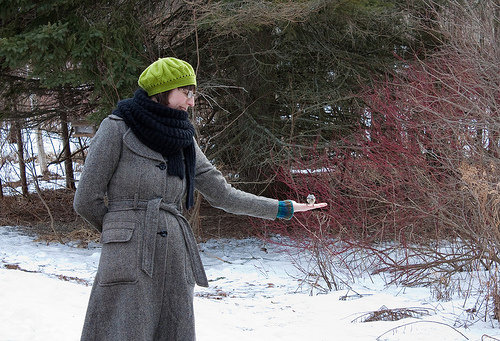