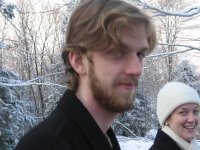 I recently completed my PhD in the Philosophy department at the University of Pennsylvania. Upon returning from China, I will begin a postdoc with the University of Western Ontario's Rotman Institute of Science and Values. My work is in two main areas: social/political philosophy, and the philosophy of science. My advisor at Penn was Cristina Bicchieri.

My dissertation was in political philosophy: in particular, I developed a new account of social contract theory that focused on how social contracts should function in diverse societies. This involved developing an account of perspectives (by which I mean a scheme of categorization and a search procedure), a novel moral standpoint - "The View from Everywhere", a bargaining approach that allows the participants to not have to agree over what they are bargaining over, and an account of toleration. This is the beginning of a larger project on diversity in social systems.

Smaller projects that I am also working in also revolve around issues with diversity. I'm in the midst of finishing a paper that got started by my CSSS work in '06 - a model of the Schelling Segregation Dynamic in which agents who want to be in the minority end up segregated anyway. I have also begun planning a follow-up paper on this topic that will (hopefully) show that if agents pay attention to different properties, there are more stable integrated states. The thought is that if some find race salient, while others find religion important, and still others find taste in music most salient, then there will be more of a chance that the macro view of the population will be integrated.

I also have been working on social norms. A paper I'm working on completing right now looks at the conditions under which multiple norms can be a stable state of an evolutionary game. In particular, what learning rules support such a stable state, and whether network structure of the population influences the equilibrium state.

In the philosophy of science, I have methodological interests, looking at the epistemic justifications of the tools of complex systems analysis. However, I am most interested in the social structure of science, particularly how incentive systems and methods of communication shape the output of science. I've coauthored a couple papers on this subject, developing an "epistemic landscapes" model of scientific sub-fields. Scientist-agents act as hill climbers on an unknown landscape. What I investigate is what methods of incorporating information about the attempts of other scientists is most conducive to maximizing social output. This project has been working with a model of implicit networks, but the next model iteration, which I hope will be able to describe longer timescales, will be moving to a dynamic explicit network structure.