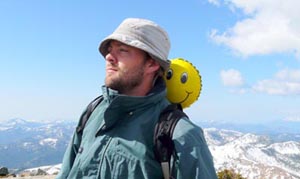 I have just completed my second year as PhD student in archaeology at The University of Arizona. When I'm not digging or writing, I enjoy playing sports and exploring the outdoors by foot, bike, or boat.

My theoretical interests are in the origins of food-producing economies and social differentiation. I primarily work in the U.S. Southwest and the Peruvian Andes. I've recently become interested in using complexity theory to understand the emergence of food production, sedentism, and social inequality. In addition, I am interested in the role that prehistoric network topologies play in the emergence of such phenomena. I am currently a member of a multidisciplinary research team seeking to reconstruct and explore macro-scale network dynamics in the U.S. Southwest between A.D. 1200 and 1400.

As an archaeologist I likely have little to contribute to complexity theory per se, but I can offer knowledge of social phenomena of broad interest that I think would benefit from complex system approaches. I am also knowledgeable in the fields of geo-spatial analytics and human behavioral ecology.

I'd like to walk away from CSSS with a network of colleagues of diverse but mutually reinforcing skills and interests. Also, archaeologists have long recognized the role that complexity can play in the formation of archaeological patterns. My hope is to gain a more explicit understanding of how complexity can contribute to studies of long-term human ecological and economic processes and a working knowledge of the formal tools available for such explorations, especially agent-based and social-network modeling.

I would be interested in testing the idea that hierarchical settlement patterns emerge from the interaction of optimal foraging behaviors, population dynamics, and coevolutionary potentials of in-diet caloric resources. Neither environmental change nor personal aggrandizement behavior—as some have suggested—may be requisite for the emergence of such patterns. I envision a general ABM that lays out simple behavioral and population rules for hunter-gatherer community agents and caloric return parameters for animal and plant resources with variable potentials for coevolution/domestication. The immediate goal would be to determine if such a model could predict the economic and settlement pattern trends that archaeologists repeatedly observe throughout the world. The ultimate goal would be to run such a model on various geo-spatial landscapes in an effort to reproduce the timing and nature settlement pattern changes under various bio-geographic conditions.