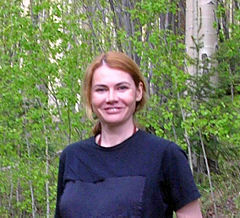 My main interests currently are in economics, econophysics, statistical physics and non-linear dynamics,linguistics and network analyses. I am also interested in the history of science as complex system. Some time in the future I would love to take a closer look at cell signaling, neuroscience, cognitive science and biophysics. I enjoy reading urtexts from the era when science was called natural philosophy and when the earlier attempt of the complexity approach still reined.

I decided to embark on scientific career at the age of 12 by joining an astronomy club in my hometown, which led me eventually to studying theoretical physics with specialization in astrophysics and to working in one of the biggest in Europe (and I believe the best :)) astrophysical observatories. For my past participation in astronomical expeditions to some hard-accessible regions of the world I was accepted this year into the New York chapter of the Explorers club "http://www.explorers.org/".

My experience in the Observatory included both collecting data, by making observations on the 2.6 m diameter optical telescope (with especially unforgettable long cold winter nights when sky is especially clear), and analysing the data via building quantitative models of stellar atmospheres and computer experiments. Multi-skilled requirements for a scientist and interdisciplinary approach were essential for the Observatory's reseach culture, triggering my interest in complex systems.

I also developed interest in linguistics and learned English, Italian and Greek in addition to my native Russian, thus taking samples out of four different language groups of the Indo-European family. Currently, I am planning to add Sanskrit to my collection and I am very interested in the quantitative approach to the problem of proto-languages. I also have a long-standing interest in comparative mythology, which probably every astrophysicist necessarily develops via wondering about the origin of constellations. Some time in the future I would love to take a closer look at the paleoclimatology and at the links uniting all these seemingly different fields of study.

I would say that my biggest interest at this point is in the ways to develop new quantitative risk measures applicable to the global financial markets, perhaps by applying the methods of network analysis.

In addition, I am interested in studies of sustainability of companies, cities and societies as complex adaptive systems, in studies of information flow in complex networks and in the studies of how the dynamics of the knowledge diffusion affects technologies and innovation. I'm interested in the quantitative studies of what causes instability and collapses of the financial markets and societies as complex networks. Perhaps it's good time to apply what we have learned from hard sciences to find a sound way towards stability and optimization, which would in turn allow us to concentrate on our Das Glasperlenspiel. At least, that's the idea.

Im my free time I enjoy hiking and running.