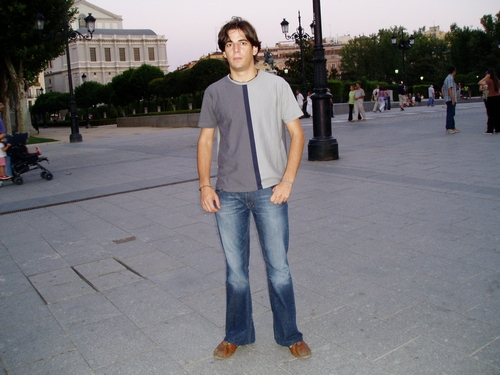 Hi! I am a third year PhD student at the Carlos III University of Madrid (Spain). My research field are statistical physics and applied mathematics. Particularly, I am currently working on nonlinear dynamics and pattern formation in systems which undergo growth and erosion processes, using analytical and numerical techniques

The objects of study are surfaces and interfaces generated in various non-equilibrium systems, which range from production of nanostructures by molecular beam epitaxy (MBE) or by ion beam sputtering (IBS) to pattern formation on aeolian sand dunes. Part of the effort to understand these systems consists in formulating continuum or discrete models aimed at capturing universal features of the phenomena under study and obtaining some continuum deterministic or stochastic equations which describe the considered processes. Numerical integration techniques of this kind of equations have been an essential tool to understand the behavior of these systems. A common feature of these surfaces is that they typically exhibit pattern formation and therefore we have extended the powerful theoretical tools which describe spatial and temporal pattern in hydrodynamical, thermal, chemical or biological systems to this kind of systems. Another important feature of these surfaces is that they can present power law correlations both in space and in time, so that their study shares many features with that of equilibrium critical phenomena.

What topics do you have some expertise in and would you be willing to help others learn them?

My background is in statistical physics and nonlinear dynamics, pattern formation, scale invariance.

What do you want to learn?

I would like to obtain an intensive introduction to other areas related to complex systems on which I have never been working before as social networks, molecular biology, evolution of ecosystems and epidemiology, etc.

Do you have any projects that would benefit from interdisciplinary approach?

I am currently working on simple models of ion erosion similar to those proposed for aeolian sand dunes. These systems present a nonlinear behavior in wich pattern formation or scale invariance can emerge. I would like to learn some new tools to anlyze them and to find out the connections between my current research field and new topics.

Do you have any ideas for what sort of project you would like to attack this summer?

I would like to obtain the background that will help me to work on something different from what I working on right now as social networks or evolution of ecosystems.

I am interested about how ordered structures appear in complex systems. Some good examples are ordered ripples or dots which appear in some aeolian or ions eroded systems.

If you were given the opportunity to see where we were in one hundred years with respect to progress on one problem/subject, what would it be?