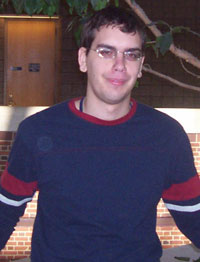 I’m a third year physics student at the University of Michigan, Ann Arbor. I work in Michal Zochowski’s Lab, studying neuroscience with a physics perspective. In particular, I’m working on projects involving neural plasticity, which mediates learning and memory. This involves analysis of rat spatial learning experiments and simulations of coupled non-linear oscillators acting on a plastic network, such that the coupling between oscillators changes based on the synchrony between them.

In general, I’m interested in stochastic processes, dynamics (on/of) networks, information theory, computation theory, and what might be called unification theories of complex systems (those that examine over-arching aspects of complex systems that operate externally to the specific subject areas; e.g. network theory, for which many analyses can be applied whether the networks represent social, technological, etc. relationships).

1. What topics do you have some expertise in and would you be willing to help others learn them?

I know some about non-linear dynamics and chaos, synchronization, a fair bit about networks, some about network dynamics, and segments of neuroscience, particularly in neural plasticity. Also, while I only know a touch about quantum computing in particular, I know enough quantum physics that some might be useful in the last week.

Having studied networks of neurons involved in learning and memory, I’d be very interested in learning about artificial neural networks and how they’re used and implemented to solve problems. I’m also interested in but largely ignorant of genetic algorithms and Bayesian techniques. On top of that, I’d like to learn more about information theory and network dynamics. Finally, week four sounds wicked cool, and I’m very much looking forward to learning more about quantum computing and neuroscience. Finally finally, if it were to come up, I’d be delighted to learn about connections between quantum field theories and networks.

3. Do you have any projects that would benefit from interdisciplinary approach?

Well, my current projects are pretty interdisciplinary, given that I’m a physicist approaching neuroscience problems. An example project to do might involve the structural and functional aspects of neuronal networks.

4. Do you have any ideas for what sort of project you would like to attack this summer?

I’d like to work on a project in one of two topics: how do networks change in time (perhaps with neural plasticity in mind), or the relationship between network structure and function, perhaps looking at local (community or modular) structure.

Favorite? Gosh. Well, I’ll stick to the plausibly tractable ones, and pick “How does the brain store, access, and process information?” That’s a biggie.

6. If you were given the opportunity to see where we were in one hundred years with respect to progress on one problem/subject, what would it be?

“How does the brain store, access, and process information?”