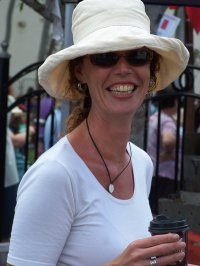 Hi there. I work as a postdoc in human behaviour modelling in the context of marine exosystems models at CSIRO Marine and Atmospheric Research in Hobart, Tasmania, Australia. I completed my PdD in economics at the university of Tasmania University of Tasmania. I am originally from The Netherlands, but moved to beautiful Australia in the '90s. I like to do go bush walking, play squash and ride my push bike.

My research is aimed at formulating, implementing, and applying quantitative models of human behaviour in the context of the marine environment and climate change. Much of my research is concerned with coupling and modelling the human and bio-physical marine systems in the face of climate change.

Although a resource economist by trade I thoroughly enjoy the opportunity to work with a group of scientists from a range of disciplines including biologists, mathematicians, modellers, ecologists, oceanographers and climatologists. As a result of my current research I have developed a keen interest in the other social sciences including sociology, psychology and anthropology, and the contribution of these disciplines in understanding the complex system, that is, the marine environment.

There are a couple of areas I’m currently focussing on. The first is related to the high level of ‘uncertainty’ that remains in a marine context. There is limited information and data available on the status of many marine resources, as well as and social and economic processes. Access to information is not straight forward, simply because access to the marine environment is often difficult and expensive. We cannot easily “see” known marine resources, for instance, to estimate abundance. Furthermore, continuous scientific discovery of new marine species suggests that there is still much to be learned about the marine environment and the relationships within it. Complexity in the bio-physical sphere is mirrored in the linked social and economic system. Integrating and accommodating the uncertainties in dynamic quantitative models of the coupled human and bio-physical spheres is an area of particular interest and part of my research.

My second area of research focuses on quantitative models of drivers of human behaviour in the marine environment. Even though the behaviour of marine resource users has been the subject of quantitative modelling for over 30 years, the policy tools that have been applied to manage the complex marine environment have in the past often had undesirable and unexpected resource outcomes. Undesirable management outcomes are often entirely attributable to unanticipated human behaviour. I am now focussing on the next step, which is to find ways of integrating information from the different social sciences in quantitative human behaviour models in the context of the marine environment. I’m also focussing on the tools that effectively incorporate and model what is mostly qualitative social data. Moreover, I’m interest in finding the optimum level of complexity for these human behaviour models.

The above has direct implications for the third and related area of research in which I focus on the effect of climate change and marine resource user adaptation. A recent study I was involved in predicts significant temperature increases in coastal areas in southern Australia. Biological tipping points are likely to cause increases in certain pest species which will affect commercial fish species abundance through competition. Temperature will also affect commercial fish species directly and a geographical shift south is predicted. Several non-linear feedback systems in the biological environment will impact on the human sphere with associate consequences in terms of adaptation. I’m interested in investigating and modelling coupled tipping points in the human and biological systems, both characterised by multiple direct and indirect feedback loops.

My last area of research interest, related to network theory, is somewhat separate but nevertheless related to the three research areas outlined above. In a marine context, network studies thus far have mainly focussed on the role of social networks on fishing success, and effectiveness of co-management arrangements. However, I am particularly interested in the effect of management policies, such as Individually Tradeable Quotas (ITQs) on social and trade networks in, for instance, the lease quota market. In my research I apply social exchange theory, and the concept of power relations in a regulated resource market.

Even though in the research described above I have learned about the ideas that underpin complexity theory and complex systems, I have not had any formal tuition in this context. Furthermore, I have used some tools to model complex systems (such as network analysis, qualitative modelling, BBNs, and ABM’s) but am keen to gain a deeper understanding and more in-depth knowledge of these modelling tools. I am particularly interested in learning more about emergence, autopoiesis, and the effect of networks on adaptation in a complex and changing system such as the marine environment in the face of climate change. I hope to be able to take the knowledge I would gain from attending the summer school back to the antipodes to inspire my colleagues. I look forward to the opportunity to share ideas and gain fresh and different views on the research that I am currently engaged in. The prospect of formulating and carrying out a project on one of the topics that is covered in the summer school in a group exercise is very exciting.