This is the working space for our project. Everything written is a work in progress.

Below is the current link to the working draft of the paper. I'm not sure if this will really work for version control. Perhaps people can just send me sections and I'll incorporate as needed. -Devin

Perspectives on Modularity and Evolvability from the Literature

This section might help to structure our understanding of the general consensus regarding the evolution of modularity. It seems that there are a rather large number of individuals that are skeptical regarding the selective advantages of modularity (Lynch 2007), though it does not appear that any of these individuals have considered the role that host-pathogens may play in determining the benefits associated with modularity, and so we might attempt to motivate our study on this basis.

Questions to answer in proposal

While interactions between species such as hosts and their pathogens (or plants and pollinators, herbivores and plants) have long been implicated as a means of generating patterns of diversification (Ehrlich and Raven 1964; Thompson 1994, 2005), the process by which forces generate robustness and evolvability is not well understood for coevolutionary systems. Previous authors (citation) have suggested that environmental variation leading to temporal changes in fitness can select for modularity in genetic architecture. In the simplest form, Host-pathogen interactions can lead to autocorrelated variation in fitnesses. However, it remains unclear if this type of variation will generate the same kind of selective forces for modularity. These interactions provide an opportunity to study a different form of temporal variation in fitnesses and allow us to test this potentially strong form of selection.

Based on an individual based simulation in matlab that I coded up tonight I got a setup that we can work with while we finalize how we want this thing to work.

Diagram of modularity of alleles in Pathogen 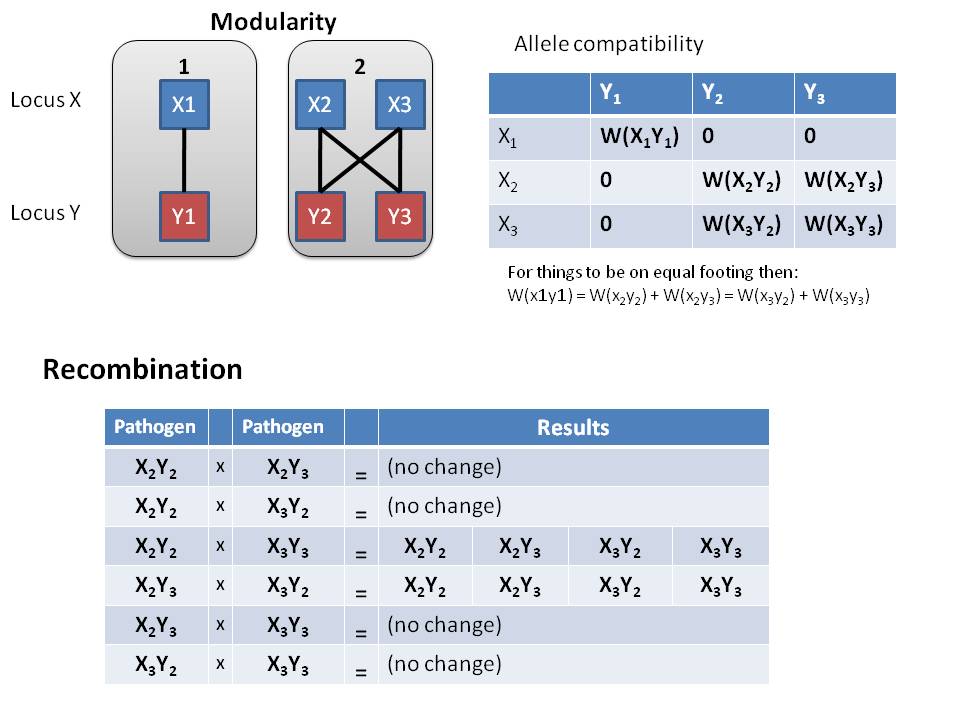 Diagram of interaction between Host and Pathogen 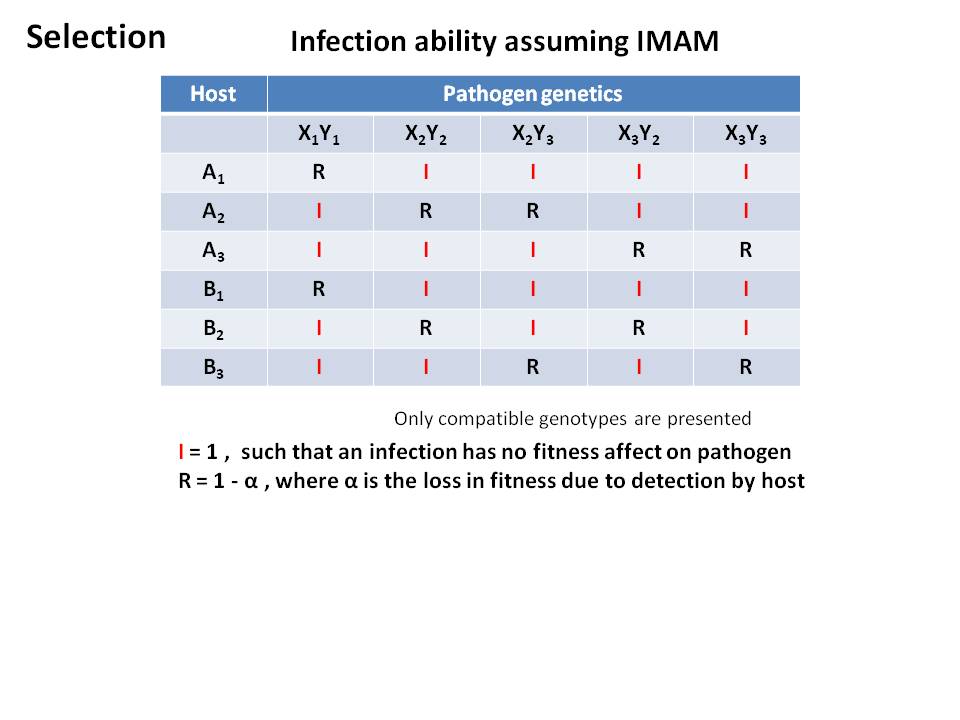 Each panel shows a pair of allele frequencies for the match between the host(blue) and pathogen (red). The top two panels show the "non modular" alleles in dashed lines. All six panels show the same set of time in the simulation but the combinations are pulled out separately for clarity. You can see the frequency dependence of the simulation where the pathogen allele will increase in frequency until a host that can detect it become more frequent at which point, that pathogen will decline. Each suscessive wave of increase cycles through the different alleles in both players. 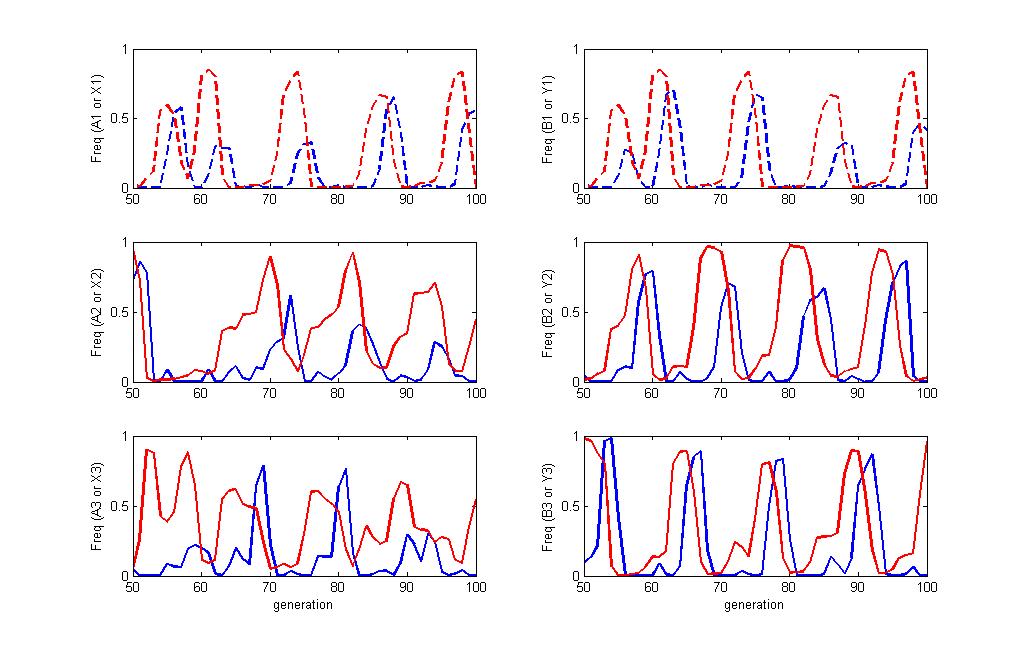 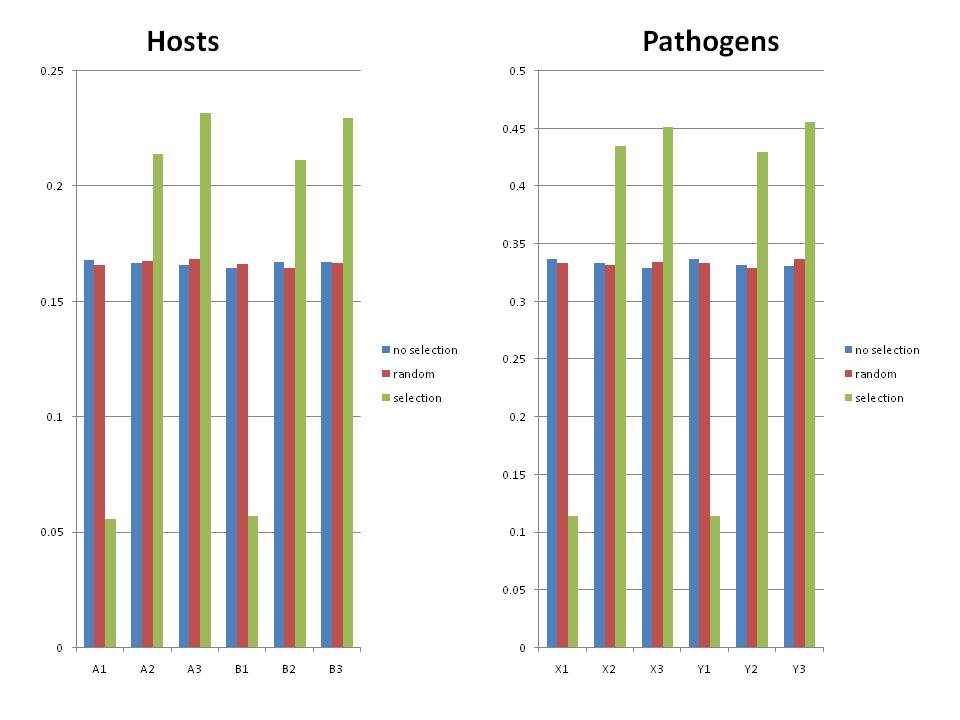 Some definitions of 'evolvability' drawn from the literature:

I'm quite sure that there is some overloading here; but these are the types of modularity that have come up in our discussions:

Some definitions of 'modularity' drawn from the literature:

Some definitions of 'robustness' drawn from the literature:

Kreimer A, Borenstein E, Gophna U, Ruppin E (2008) The evolution of modularity in bacterial metabolic networks. Proceedings of the National Academy of Sciences 105:6976-6978.

Lynch M (2007) The frailty of adaptive hypotheses for the origins of organismal complexity. Proceedings of the National Academy of Sciences 104:8597–8604.[pdf]

I'm not at all a biologist, but perhaps there is some way to quantify modularlity in terms of clusters in these networks? Look at cluster dynamics? Clustering that takes into account link weights (e.g. greater link weight than expected by chance)? Perhaps some of this has been looked at? As in http://www.pubmedcentral.nih.gov/articlerender.fcgi?artid=1865589 -- Laura