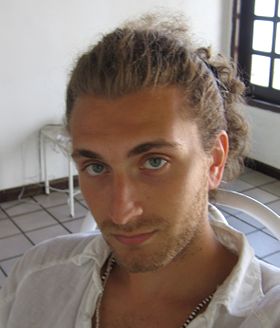 Hello there, formalities first: I am Giovanni Petri, PhD student at the Centre for Transport Studies and the Complexity and Networks group at Imperial College London, my advisors being Prof. J. W. Polak on the engineering side and Prof. H. J. Jensen on the math one.

You can drop me a Terry Pratchett quote at gpetri@imperial.ac.uk or click here for the ugly site, or here for my (slightly better) homepage; my battle with wordpress for graphic supremacy is ongoing: the site is in the making and soonish there might be something resembling a list of projects.

Chit chat now: I've always been fascinated by shapes, pattern and regularities, belonging to math, the real world or even just ways of thinking. So I ended up studying physics to (try and) make sense of all that. I completed my MSc in Theoretical Physics with a thesis about primordial structure formation during Inflation, basically the Universe's wrinkles. As I was going through it turned out that what thrilled me had a lot in common with many issues in complex systems, statistical mechanics and the such.

Making a long story short, I am working on the interfacing of information and transportation networks. It looks a long way to go from cosmology but -in truth- it’s not. The goal of identifying and characterizing extremely non-trivial and involved spatio-temporal patterns in a changing space from simple rules can be applied to both fields equally well. Consider, for instance, a model of a traffic network, where cars circulate, coupled to an information network, where information diffuses. The population on a node influences the informational state of the corresponding node in the information layer. The latter modifies the rules by which the cars go around. What is happening is that you have a bunch of particles changing the landscape they are moving in, while the landscape defines where they are going to move next. Beyond the technicalities, the picture is not very different from early universe particles moving around according to a metric, that they contribute to modify as they move. And if you find some self-organization, then that becomes VERY exciting!

Going back to the mundane, I live of short, very strong obsessions and these over the years encompassed basketball, tennis, squash, football, guitar (still trying, still failing), reading (lots!), trekking, video games (Eve Online for the converts), parkour and Capoeira. The last one, having lasted for quite a while now, is the exception that confirms the rule. Also, since there are so many climbers I wouldn't mind getting a crash course. No, wait, bad phrasing...

With languages I am slightly better than the average Italian, meaning that I can communicate in English, snore in French, had some pretty unsettling "lost in translation" experiences in German and sing (badly) in (poor) Portuguese. Oh and in London I'm trying to pick up British accent and self-deprecating humor.

What are your main interests? Feel free to include a "pie in the sky" big idea!

Pretty much everything relating to the physics of complex systems, provided I can attack it with the tools of statistical mechanics and the bit of mathematics I remember. Probably due to past exposures to cosmologists and string theorists, I am deeply interested in everything that promises to uncover hidden links, relations among wildly different systems and structures, and emergence. That goes for non trivial effects between traffic and transport (see above), population dynamics, financial systems, virtual world behaviors etc.. up to network embedding in metric spaces, knot theory and its links to networks, RG techniques...

What sort of expertise can you bring to the group?

What do you hope to get out of the CSSS?

I want to get a broad solid base on which to build my complex systems "pie in the sky", because I feel completely lost sometimes in the sea of applications, methods, issues that arise in this field. Second, I wanna meet cool people with whom have the aforementioned brainstorming sessions and enlightening discussions. Last but not least at all, enjoying the whole thing lots, having a good time, getting friends, good wine, nice places, go hiking, crash-climbing etcetcetc!

Do you have any possible projects in mind for the CSSS?

Yes, but I'm shy and I'm not telling you.