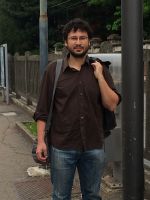 I am a research fellow at the University of Trieste, Italy. The quest for the “big picture” was what attracted me to the study of human history. My research track began with maritime and social history of the borderland area between Italy, Austria and Yugoslavia in 19th and 20th century. It continued, during my Ph.D., on memory studies and the analysis of the political exploitation of history.

In July 2015 I began a new research focused on the role of the British community and capital in the free port of Trieste, from 1810s to WW1. It regards the European convergence of the 19th c., while the great divergence between the West and the rest was in action.

Pretty much phenomena in historical human behavior have terrific analogies with many other phenomena with which CAS did very well. The engagement between CAS and historiography, begun in Big History, is making a great deal in enhancing the relationship between STEM and HSS. In my field, it can deliver an outstanding contribution to the knowledge of the history of globalization, leading to a fresh view on our times. There are plenty of historical data out there!