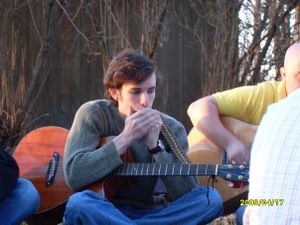 First things first: All my friends and professors call me "Siggy." It's short for SigmaX, the alias I've used online for years.

I just completed my fourth year at Andrews University, a small school in southwest Michigan, double-majoring in Computer Science and Mathematics, with a Physics minor, to be graduating December '10.

Home is southern Illinois. I'm a country boy in denial, trying to be cosmopolitan and city-like (Lol -- as if Chicago had any role in my upbringing so far south) -- but I recently embraced my roots and started listening to country music again (talk about nostalgia!). If you ever catch me speaking with an accent, it's probably because I just got out of my car while singing along with Richie McDonald or some other Nashville star.

My blog is titled White Socks, AI, and World Hunger, and covers my three primary interests. I'll briefly describe them for you here.

The only thing not covered in these three headings is music -- I love to compose music, primarily on the piano. I keep it under the hat most of the time, kinda my own private hobby -- but ask me before the end of the summer to play you whatever I've been working on!

My work experience thus far has been in web and database programming... but AI is my passion.

Complex systems, and thus the SFI, has had my attention ever since I did an independent study in Computational Intelligence a couple years ago (which resulted in three essays). Current trends in AI, especially neural nets and evolutionary computation, draw inspiration from a wide array of complex systems in nature -- and I see a broad education in complexity as a way of enhancing my ability to contribute to the field.

My biggest engagement with complexity so far has been a paper I presented at a science and religion conference in Italy last summer, titled "Artificial Intelligence and Intelligent Design," aiming to introduce theologians to emergent complexity as a debunk of Intelligent Design. Mostly they were amused -- since ID just isn't an issue for Europeans the way it is in the U.S. -- but any presentation where you put the Mandelbrot set on the screen is bound to get positive feedback :-).

At the moment I've been exploring statistics and probabilistic AI (i.e. Bayesian networks) to round off my agent-based bias, and will be doing an independent study in probabilistic data mining in the fall. I still haven't decided if I'm a Bayesian or a frequentist, but the bias of the computing field sure seems to be pulling me to the former. I'm interested in applications to bioinformatics and computational neuroscience, and may minor in one of those areas while pursuing a Ph.D. in Computer Science, Informatics, or Machine Learning.

If I have my way, I'll also do an independent study in information theory this fall to finish up my math degree. Most exciting, however, I'll be a TA for Andrews' AI class this fall, and will be giving some (or most!) of the lectures. Yay for small-school opportunities and a shortage of grad students to compete with!

I have grandiose ideas on how to create an ecosystem of fitness landscapes and use Bayesian modeling to facilitate autocatalytic cooption between them -- combining the strengths of open-ended, diverse Artificial Life with the teleology of AI. I'll let you know if it works :-P.

Science aside, I have a strong philosophical bent, centering primarily around the concepts of the "Other," and the importance of recognizing one's own fallibility and not judging (on scientific or moral matters) until you've sought to understand the other side. This interest is rooted in my own experience growing up conservative Christian and then abandoning my faith, but has flowered into a larger struggle to balance the postmodern respect for the Other with the modern respect for the reality and importance of the truth. It's as closely related to the philosophy of science as it is to the Christian idea of "love thy neighbor."

"White Socks" refers to an inside joke between a friend and I: we once found ourselves discussing how wearing white socks (or, rather, any socks) with sandals is considered rather tacky here in the US, but in (parts of?) Europe it's perfectly fine. "White Socks" became our phrase, then, to describe differences between the Self and the Other that one may be tempted to ridicule or dismiss prematurely. For example, I muttered it to reassure myself the first time I ate rice and curry with my hands (messy!!), thanks to the influence of Indian friends.

I'm in the early stages of writing a book, tentatively titled "You Believe What?!" It aims to draw mostly on stories and experiences of my friends and I. However, I won't be able to resist bringing in myriad philosophers, including but not limited to Hume, Kuhn, Levinas, Baudrillard, Lyotard, and (my favorite) Miroslav Volf. 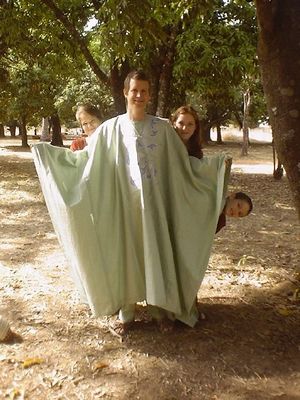 My father grew up as a missionary kid on a Navajo reservation less than 200 miles west of Santa Fe. My grandparents were subsequently missionaries everywhere from Jamaica to communist Ethiopia, having left New Mexico because they felt their sponsoring church placed too much emphasis on evangelism and too little on economic development and education. My parents taught English in Indonesia as newly weds and, two decades later in 2000, my sister and I went with them to northern Nigeria, where my Dad (a family practioner) volunteered at a mission hospital for a year. Service is a word my family takes very seriously, and it's completely intertwined with their faith.

If you have never been to a Third World country, please visit the Global Rich List for a brief epiphany. I try -- and inevitably fail -- to keep aware of the big picture and my place in it as a westerner. Even though I only lived abroad for one year, I consider myself a Third Culture Kid.

Nigeria holds a soft spot in my heart, and I may go to volunteer in the future (though I'm not sure quite how to fit it in around grad school). I speak a smidgin' of Hausa, and can almost find my way around domestic life with the French I've picked up from my sister, who was inspired by her international experience to spend summers in Europe and become a French teacher. She'll finish her masters at the same time I graduate.

This summer I'll working Doyne Farmer on studying trends in technological development. I read Brian Arthur's The Nature of Technology this winter, and am looking forward to being involved in further research related to his paradigm (which closely parallels my ideas on AI). 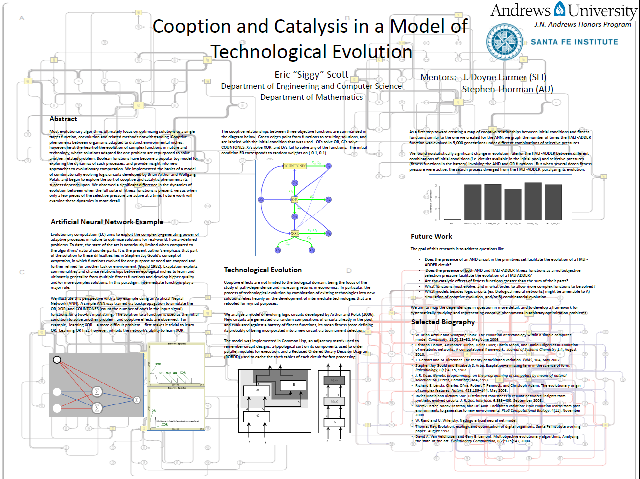 Most evolutionary algorithms ultimately focus on optimizing solutions to a single target function, coevolution and related methods notwithstanding. Cooptive phenomena between organisms adapted to distinct environmental niches, however, lie at the heart of the evolution of complex functions in nature and technology, where solutions adapted for one problem are repurposed to solve another, related problem. Boolean functions have become a popular toy model for exploring the dynamics of such processes, and provide insight into new approaches to evolutionary computation. We implemented the basics of a model of combinatorially evolving logic circuits developed by Brian Arthur and Wolfgang Polak, and began to explore the sort of cooptive and catalytic phenomena its success depends upon. We observed a significant difference in the dynamics of evolution between when the full suite of fitness functions is present, versus when only a few pieces of the selective pressure are active at a time. Future work will examine these dynamics in more detail.