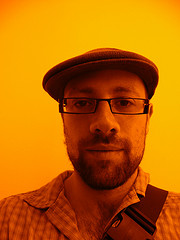 David is a graduate student at the Nelson Institute Center for Sustainability and the Global Environment housed within the University of Wisconsin - Madison. His research focuses on the patterns, trends and processes of agriculture at a global scale. Specifically, he is interested in the international transport of embodied carbon in agricultural commodities exported from regions undergoing land-use change. His broader interests lie in the emerging discipline of sustainability science, and how to most effectively integrate science in the building of a bright green future.

He received his undergraduate education at the Lyman Briggs School of Science at Michigan State University. His research on the local impacts of climate change followed the migratory path of the Arctic tern from Barrow, AK to Antarctica. David then returned to the mid-latitudes to work at the Smithsonian Conservation and Research Center mapping giant panda habitat and then to the tropics where he worked with CREA-Panama (Conservation, Research, Education and Action) mapping tropical agricultural expansion.

When David isn't glued to the screen of his mac you can probably find him whipping up something chocolaty or a homebrew in the kitchen, perusing the local farmer's market, zipping around the Madison lakes in his kayak, playing ultimate frisbee, taking pictures or tending to his colony of worms.