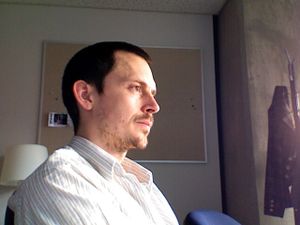 I’m currently a graduate student in the Philosophy department at the University of Wisconsin—Madison. I study the philosophy of science.

After earning a B.S. in Mathematics in 1997, I left school for a while. I spent a few years painting houses and working in food service before moving on to teach high school math and critical thinking. I began grad school in 2005.

In the small portion of my life not devoted to study, I maintain a few relationships, practice yoga and cooperative living, and do a little cooking.

As a philosopher of science, a broad-brush description of what I do is that I study the scientific method. Within the study of methodology I have two main interests.

The first is the nature of inference and justification (evidence) in scientific thinking. Of course, a lot of scientific inference has been refined and formalized in statistics. Philosophers are not so much engaged in critical evaluation of existing statistical methods (though they do take part in, e.g., the Bayesian/ frequentist dialogue). Rather, we are interested primarily in those parts of scientific reasoning that have not yet been formalized, or those parts that are not even fully recognized as a part of the process.

Well…as a beginner to complex systems, there is probably nothing that I can contribute as far as specific expertise about the topics we’ll be learning about. What I do have to offer (and I don’t yet understand how or whether this will be valuable to others) is a fairly deep familiarity with the ambiguities of many concepts central to scientific discourse—e.g., “explanation”, “prediction”, “causation”, “confirmation”, “evidence”, “theory”—and with the many proposals put forward for how to make these notions more precise. This expertise may be helpful for understanding what, in the big picture of science, makes complexity science different from other approaches (insofar as others are interested in thinking about such things). (I am!)

Here’s a sketch of how complex systems science fits into the interests I mentioned above. I hope to explore these connections.

Practices in complexity science depart (at least superficially) from those of other fields. E.g., the models and explanatory strategies look different. These differences challenge philosophers of science to refine or expand our picture of how science works. This challenge is a focused version of a more long-standing problem for commentators on scientific methodology—that of fitting the biological and social sciences into standard conceptions of science (which are based primarily on (parts of) physics).

[b] conceptual disputes (esp. in systematics and evolutionary genetics)

Complex systems science is now supplying new concepts and frameworks for use in evolutionary genetics. Indeed it may be primarily the integration into evolutionary genetics of concepts from complexity science that brings about the anticipated extended evolutionary synthesis. I hope to participate in the conceptual struggles that will accompany this integration. And I hope that a familiarity with the foundational ideas and tools of complex systems research will put me on track to do that.

I don’t yet have any projects in mind.