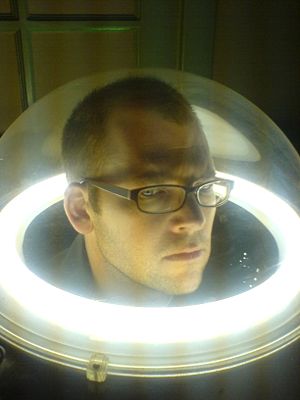 As a scientist, I try to understand how the future cycles of water, energy, and nutrients on land might be different based on the interactions between the biosphere and the atmosphere. Because plants are individual agents making decisions on the allocation of scarce resources, their future behavior is strongly dependent on relative changes in the constraints they face, such as heat, moisture, nutrient and water supply, and competition with others.

The core topic of my dissertation is to develop a monitoring system of forest physiology and structure. Canopy architecture can be inferred from satellite imagery – even if no individual trees are seen – because the shadows cast by trees darkens the directional reflectance of a forest as seen from space. By using the parallax from two sequential measurements, we can estimate the stand density and crown size most consistent with the observations, using a Bayesian inversion technique called the Ensemble Kalman Filter. Particularly exciting is the use of allometry as a constraint to the model inversion: strong correlations in crown size, tree mass, and stand density mean that instead of finding many independent structural attributes using few observations, we are picking a single composite variable representing forests that range from young, short, stands of many trees, to old, tall stands of few large trees.

Another fun direction is using modern computer graphics algorithms to compute the light field of real forests using 3D depictions of trees using L-systems (a flavor of fractal geometry) and ray-tracing techniques, which exploit the graphics cards of the PlayStation3. I haven’t played video games for a decade, but it turns out there’s a lot that can be borrowed from gamers that improves the realism of ecological and physiological models.

This forest structure assimilation work was originally intended to infer boreal forest age and structure in Siberia, because the carbon budget of these forests is closely linked to their position within successional cycles. To get the allometry of Eurasian forests, I translated from the original Russian a compendium of destructive forest harvests used in their forest inventory program. I used the data on branch:trunk allometry and height:diameter allometry from this database to develop a fractal model of Stem Area Index for use in remote sensing, based on the work of Enquist Brown and West. While visiting Siberia developing this work, I got excited about using herbivores to bio-geoengineer climate, and this became a cover story for Stanford Magazine last fall:

The satellite inversion work would be particularly useful in the tropics, where there are so few inventory plots for monitoring changes. I just submitted a proposal to use airborne lidar to image the 3-D structure of forests in Hawaii, and use these observations to develop the allometry of stand architecture that could be used elsewhere in the tropics, using a new model of crown competition developed by Pacala et al. that will be extented to model crown shadows using the ray-tracing technique described above. We are hoping to supplement the airborne lidar with a groundbased system, so that the 3-D structure of branching can described; the trees modeled using L-systems can use the information on branching structure to describe trees with different topology and different recurrence relations, and we hope this will be useful in generalizing relationships between crown dimensions and tree mass.

My original dissertation proposal was to use stable isotopes of water vapor to interpret changes in the water cycle of Siberia, where the water cycle is most closely linked to biosphere-atmosphere feedbacks. That work was not funded, but I did develop some modeling tools for simulation of water isotopes in the atmosphere. We have started applying these models to an interesting global shift in the isotopic composition of kaolinite during the Cenozoic to ask: how did the evolution of stomata in plants lead to colonization of continental interiors, and change the water cycle on land?

I want to attend the Global Sustainability program because I want to reconnect with the impulses that led me to become a scientist in the first place: to strategize how we as a global society can make changes that alter the course we are on. Last year I started developing a mock curriculum on “Worldviews in Sustainability”, a growing flat file of every perspective I could find on sustainability, ranging from Ostrom’s World (sustainability of a shared resource is viewed as a collective action problem), to Lovins’ World (actually two views: sustainability would be economically viable if the true external costs of all resources were paid, and that sustainability can be reaped by major improvements in energy efficiency), to Holling’s World (sustainability is an ecological concept, tied to the resilience and stability of the underlying resource), and numerous others. The climate and energy problem is bounded on the one side by physical laws, and on the other hand by human action. I am hoping to engage with people who are engaged soberly but imaginitively with both these worlds, offer my thoughts, and hear what they have to say.