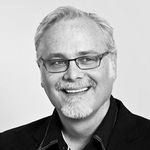 Mickey McManus, The Future of Technology