Difference between revisions of "Organizational adaptability and robustness in dynamic environments"

Thought this would be a good place to add any thoughts/ ideas between meetings and also to perhaps place any interesting points from the literature that you have found so everyone is up to speed but doesn't neccesarily have to read everything! Richard.

A lot depends on getting hold of the model from Josh.

Learn: How process to generate structure and environment affects viability and performance. What is the tradeoff between surviving in the long term and making as much money as possible in the near term.

I think it would be good to test the hypothesis - does increasing efficiency (profit) always decrease the resilience (ecological) of the system? Richard

Option A
We define a number (10, 20?) of different static environments, E, ranging from lots of resources, few resources, high inter-anual variability and perhaps even some with a stochastic element. Each organisational genome is then tested n times against each environment, and can either survive (pass) or fail (die). The genome that passes the highest number of E is the most resilient to the widest possible range of inputs (but will probably not be the most efficient for most of them).

Option B
The environment is given two variables, r, which is the lowest possible value of resources coming in and variabilty, v which could be defined as the average (stochastic) change in a system over a time period we define (a certain number of model ticks). For each genome we paramater sweep r and v. An organisation can either live or die. This will give us a range of r and v values for each genome in which the system did not fail. The system with the largest range of input values is the most resilient. Plotting r and v on a xy axis would define an area in which a the system could absorb inputs, and this area is equal the the resilience value R. It would be interesting to investigate if there were some genomes that had a slightly smaller resilience value, but overall much higher efficiency (measured by gross profit over the time of the simulation?).
The result may look something like this for each particular 'genome'. 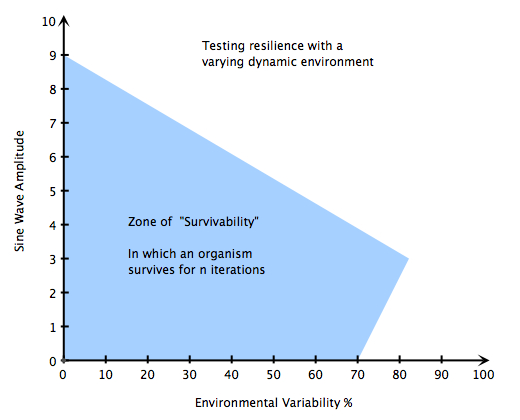 Each genome starts in a static environment a in which the profit from the resources has reached its maximum (i.e. the system is in equilibrium). Then the environment changes to a second state b. The time t taken for the genome to reach its maximum potential output (i.e. no nodes are missing any oppertunities) is a measure of the agility. The smallest value of t is the most agile organisational genome.

Fitness with respect to what?

Here I propose some definitions of what we are testing robustness and agility against...(Richard)

So when a system is stable it is with respect to profit (or alternatively the bank balance?).

When a system is robust, it is with respect to whether or not the bank balance goes below $0.

When an organism is agile, it has the smallest possible t when changing from equilibrium with respect to a stable environment a to a new stable environment b. The measure of stability is the profit (or perhaps bank balance?) of the organism.

We are testing its robustness with respect to the number of nodes (amplitude of perturbation) removed from the structure, with the measure of the time t it takes to return the maximum possible output within the new system.

We are testing its resilience with respect to the variation in the environment against the measure of does this organism survive over n iterations?

Adaptability - see wikipedia In the model the only difference I can see with this and robustness is that with one we take out nodes, and the other we change the environment from one static state to another. The measure in both cases is the same, the time t taken to reach equilibrium again.

Robustness - also wikipedia The time t after a shock to the system in which it takes to reach equilibrium again. The shock is taking out nodes. 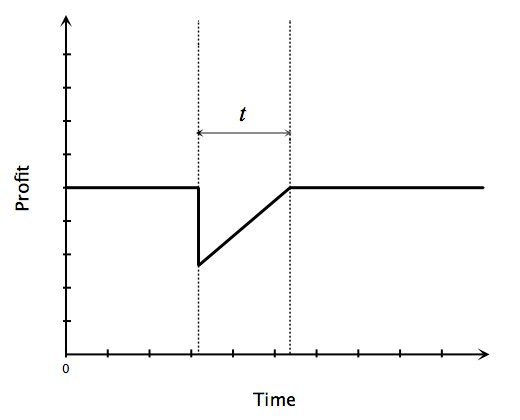 This is the definition which i think is useful (cut and paste from wikipedia):

Ecological resilence: When a system can reorganize, that is shift from one stability domain to another, a more relevant measure of ecosystem dynamics is ecological resilience. It is a measure of the amount of change or disruption that is required to transform a system from being maintained by one set of mutually reinforcing processes and structures to a different set of processes and structures. The second definition emphasizes conditions far from any steady-states, where instabilities can flip a system into another regime of behavior - i.e. to another stability domain. In this case resilience is measured by the magnitude of disturbance that can be absorbed before the system changes its structure by changing the variables and processes that control behavior. This type of resilience has been defined as ecological resilience.

There is also the 'engineering' definition of resilience: concentrates on stability near an equilibrium steady-state, where resistance to disturbance and speed of return to the equilibrium are used to measure the property.

Certainly when considering past societies the first definition is more interesting and useful, but perhaps harder to model? Perhaps we could consider which organizational 'genome' has the largest 'stability domain' as an approach to understanding robustness?

Adaptive Capacity could be a key concept to consider here.

This article has a good definition I think [http://www.ecologyandsociety.org/vol9/iss2/art5/ Resilience Adaptability and Transformability in Social– ecological Systems]

For the purposes of computer modeling, (given the many differing definitions of agility and robustness) it may be helpful to restrict the definitions as follows:

This is Josh's presentation on Growing Adaptive Organizations

This book is about agile organzation, how to manage information network in the organzation from the viewpoint of complex adaptive system.(THE AGILE ORGANIZATION) -Jiang

Information exchange and the robustness of organizational networks

STABLE OR ROBUST? WHAT'S THE DIFFERENCE?

The Science of Self Organization and Adaptability

Definitions, Measures, and Models of Robustness in Gene Regulatory Network

O'Suliven (2008) - 'The Collapse of Civilizations: what palaeoenvironmental reconstruction cannot tell us, but antrhopology can'


This article I think is excellent and suggests a number of interesting points. Especially consider that he suggests that minimizing hierarchy can maximize long-term sustainability.

Scheffer and Westley (2007) The Evolutionary Basis of Rigidity

Diamond (2005) Collapse - A useful synthesis but pretty simplistic. Interesting comparison between so called top-down success and bottom up success.

Panarchy is a concept that is becoming widely used in my area - I have the 'Panarchy' book and it has a chapter entitled The Devil in the Dynamics: Adaptive Management on the front lines - I will report back when I have read it.

Janssen et al (2003) Sunk Cost effects and Vulnerability to collapse in Ancient Societies - we could perhaps apply some of the ideas/ formulas here for resources/population equilibria and how this varies when there is investment in structures (organizational structure?). There is also a resource use function we could utlise to incorporate feedback for the environment.

see also [http://www.ecologyandsociety.org/vol9/iss1/art6/ Overexploitation of Renewable Resources by Ancient Societies and the Role of Sunk-Cost Effects]

I will try and dig out some case studies from human settlement in the North Atlantic and also in the pacific where a lot of work has been done. I also will try and find some information on the surplus cost of maintaining a complex hierarchical structure in past societies - there are some leads in the O'Suliven article to follow.