Difference between revisions of "Lara Danilova-Burdess" 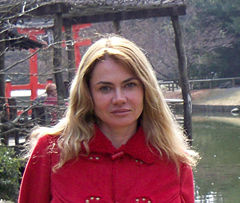 My main interests currently are in economics, econophysics, statistical physics and non-linear dynamics, linguistics and in the history of science as complex system. Some time in the future I would love to take a closer look at cell signaling, neuroscience, cognitive science and biophysics. I enjoy reading urtexts from the era when science was called natural philosophy and when the earlier attempt to the complexity approach still reined.

My experience in the Observatory included both collecting data, by making observations on the 2.6 m diameter optical telescope (with especially unforgettable long cold winter nights when sky is especially clear), and analysing the data via building quantitative models of stellar atmospheres and computer experiments. Multi-skilled requirements for a scientist and interdisciplinary approach were essential for the Observatory's reseach culture.

I would say that my biggest interest at this point is in the ways to develop new quantitative risk measures applicable to the global financial markets, perhaps by applying the methods of network analysis. In addition, I am interested in studies of sustainability of companies, cities and societies as complex adaptive systems, in studies of information flow in complex networks and the ways it could be optimized, in the studies of how the dynamics of the information flow affects technologies and innovation, and in the quantitative approach to learning of what causes instability and collapses of the financial markets and societies as complex networks. Perhaps it's good time to apply what we have learned from hard sciences to find a sound way towards stability and optimization, which would in turn allow us to concentrate on our Das Glasperlenspiel. At least, that's the idea.