To develop a model that explores the salient dynamics of the real estate credit crisis in the US.

A three- sector model of heterogeneous interacting agents (HIA) consisting of a credit-network of banks, firms and households. 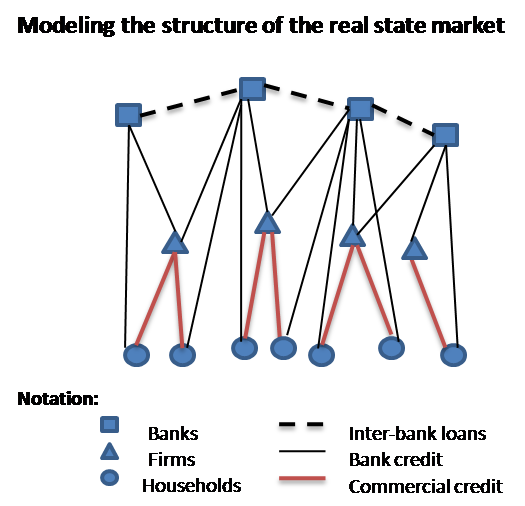 From Rory, we have a stick figure cartoon of the crisis (contains written offensive language) [1]

Back of napkin model

- Hey, just some thoughts on this. Mark Taylor's work on micro/macro finance and crashes in light of complexity economics might be of interest here. He does a great job of explaining the LTCM/Asian tigers crash of 1999. David Harvey's work on the redistribution of crashes via international financial networks as ways of managing accumulation crises also has a lot to offer complexity economics. Eric Beinhocker's work also does a great job of laying out parameters of complexity economics as a whole. My concern about modeling these types of crashes is that modeling a given system can be really decieving, cause really there's an intricate web of complex nets at multiple levels of scale and widely spatially and contextually distributed, all in careful equilibrium, such that minor disturbances in one can trigger a phase change in another, making endogenous analysis problematic. Even the time series analysis done by Mandelbrot and co. in stock markets really does little more than a form of what Liz was doing with expanding 1D time-series of a 3D system, but with a LOT more degrees of freedom at stake. Which isn't to say this sort of modeling doesn't interest me, I just wonder how to do it justice. So, with the Bear Stearns crisis, it seems to me we've got another example of the financial industry coming up with new 'financial products' (in this case, sketchy loans) designed to avoid the fitness conditions provided via market regulation in congress. This leads, as it does everytime the financial sector outwits the regulators (as they do cyclically), to overleveraging of credit, inflation of the market, confidence crisis, government bailout of those who created the bubble, and large scale wealth transfer from low end of the market to the high end. Don't get me wrong, some lose their shirts on the high end, but overall, this sort of 'managed credit crisis' acts as an overall wealth pump from the low end to high end of the market, not due to conscious planning of the crisis on the part of the financiers, but as a macro effect of micro-rules based on outwitting regulators to maximize short range profits. Problem is, though, so many other networks are nested and intertwined here, I mean, how do you take into account shifts in the fitness environment leading to the evolution of new financial technologies, all of which caused the setup for the model in the first place? This problem REALLY interests me, just not sure how to do it in a way that doesn't ignore these complexities. Ideas? Chris

We need to keep this fairly simple. We're not trying to model the US economy. Let's stay focused on what questions we're trying to answer.

A borrower agent is described by its credit score. A credit score is an weighted aggregate of the following four attributes of the borrower:

35% — punctuality of payment in the past (only includes payments later than 30 days past due) 30% — the amount of debt, expressed as the ratio of current revolving debt (credit card balances, etc.) to total available revolving credit (credit limits) 15% — length of credit history 10% — types of credit used (installment, revolving, consumer finance) 10% — recent search for credit and/or amount of credit obtained recently

Credit score distribution in the US is: 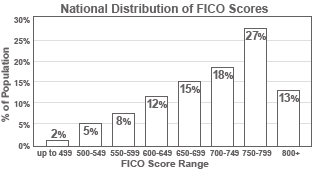 As a first-order approximation, this can give us the distribution of “risk” profile among borrower agents. Additionally, depending on income (and perhaps credit score itself), value of the property being considered is probably a variable – that is, amount of the loan (certainly, the maximum one can borrow is related to one’s credit score). For the purpose of our model, we should just assume adequate supply of homes fitting the borrower agent’s borrowing capacity. And given the interest rate (and for some people, monthly payment), the borrower agent will either go for the loan or not (and shop around).

We need to also determine an agent’s propensity to borrow – what motivates an agent to decide to purchase a home, and how do we model that?

When a lender agent receives an application for a mortgage, it will process the application according to some pre-specified underwriting rules.

Some good information on underwriting practices can be found at:

Information on subprime lending and subprime crisis can be found at:

We need to come up with a simple algorithm for the lender agent in the model, which will determine if the loan will be made, and if so, return principal amount of the loan and term structure of the loan (fixed or variable interest rate and length of loan – and if the rate is to vary, rules for that). What are the key variables we can tweak to either encourage or discourage non-prime lending?

And after the loan, so what?

Certain percent of the loans will default. How do we model this? For the first model, we can assume some percentage of default rate, given the borrower agent’s credit score (hopefully, this data is available). When do they default (first year? Second year?...)? Can we make some simplifying assumptions (e.g., if you don’t default during the first five years, you won’t default, or something like that) for the first model – we can refine the model after we get the first, simple model working.

Future Refinements we can consider for the model

Lender agent’s ability to continue lending should be dependent on previous periods default history (some can/should go bankrupt), which should be directly related to its profitability.

Borrower agents will shop around (quality index for lender agent, based on the quality of its portfolio, or perceived "easiness" of getting the loan).

Comment from Dan: (1) It is important to note that the Bear Stearns problem was in part a problem with the underlying mortgages, but also in a large part the fact that they were leveraged to such a large degree that when the MBSs became illiquid they had no way to meet margin calls other than dumping liquid assets like equities at potentially less that great prices. In fact, a big "problem" these days is that of modeling leverage and the way that leverage propagates through a financial network. That was at the heart of both the LTCM meltdown as well as Bear. (2) The above discussion of Bear seems to be divorced from the MBS and only looking at the underlying assets. Note the distinction - the MBS is a packaged collection of mortgages that are bundled into a potentially complicated tranche structure. The "meltdown" came when these bundled objects became hard to move. Part of that was because the market decided that they no longer trusted the ratings system. When this sort of central trust mechanism was removed the market seized up - almost independent of what the underlying assets were worth. This would be worth thinking about - the place of a central controller in a market and the importance of trust.