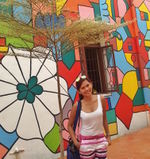 Anjali Tarun]], National Institute of Physics, University of the Philippines