I'm a postdoc at Stanford university, studying representation of the visual field, objects, and object categories. I've also long been interested in the dynamics of complex systems. 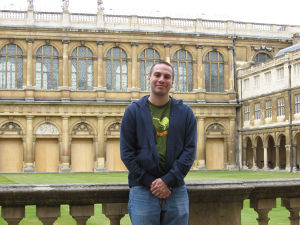 I was lucky to attend a workshop at SFI in 2003, and had a great time. Now looking forward to the main course!

I'm in Calliope 14. You're always welcome to knock.

I've been interested in the behavior of complex systems for quite a while now, so my main interests run wide and deep. I'm very interested in modeling the behavior of human interactions and cultures, particularly in examining differences and similarities in behaviors across scales. I remember reading accounts of memetics and cultural evolution by writers such as Dawkins, and am interested to see how far these ideas have been taken to model behavior.

I'm also interested in understanding models of animal population changes, but for a somewhat more sober reason. I feel that the first half of this century will see a lot of challenges to human society in the form of skyrocketing cost, and decreasing availability, of resources such as cheap energy sources and clean water. I'm not sure anyone knows exactly what will happen, but I think an understanding of the dynamics of complex systems can be one of the most powerful tools in preparing for what might happen.

Finally, some of my neuroscience research has focused on the problem of object recognition and object representation: do our brains form some sort of continuous "shape space" or "object space" to represent different objects? Working with this question, and with highly-parallel fMRI data, has introduced me to the ideas of higher-dimensional space representations, and problems of dimensionality reduction -- finding a relatively small subset of a much larger space which can compactly describe a set of things. I hope to see how the formulations of problems in higher-dimensional spaces is done in complexity theory, and how people who think about these things visualize these complex phenomena.

I have a lot of experience with biology and neuroscience, and have reasonably good knowledge of neural anatomy and functionality. I spend a large chunk of the day coding in, and otherwise working with, MATLAB. I am very concerned with producing elegant data visualizations, as well as reusable code that is well-documented.

I hope to get at least two big things out of CSSS:

First, I hope this is an opportunity to meet, work, and have fun with lots of people from different backgrounds, and get exposed to radically different ways of thinking about problems. I really like studying the brain and vision, but having spent so much time in this field, I think I'm at risk of getting too narrow a perspective. My last experience at SFI, for a short course, helped me re-expand my perspective; I hope the Complex Systems school is similarly reinvigorating.

Second, I hope this course provides an opportunity to flesh out my understanding of a lot of the details about modeling complex systems, and also about theories of computation in general. There are a lot of trains of thought to which I've been exposed, which I think relate to each other, but the exact details of those relationships were not clear. For instance, I think there's a mechanistic relationship between the way statistical mechanics can count "degenerate" (statistically equivalent) sub-states of a system to produce something profound like increasing entropy, and the idea that populations move unidirectionally along a higher-dimensional fitness space. But what this relationship is, I'm not sure. Perhaps it's really not known, but I figure if anyone understands these issues, it's the folks at SFI! :)

4. Do you have any possible projects in mind for the CSSS? (Recall that you will all be working in groups on at least one project with the goal of presenting your progress on the last day and finishing up a paper by sumer's end.)

Actually, I don't have anything particular. Given that what I've written is all pretty broad, and a month is short, I'll need to think some more to find an appropriate-sized question to tackle. I noticed that one other participant mentioned what is referred to as the "credit assignment problem" in neuroscience: given a series of decisions and delayed feedback on the decisions, how does one decide which decisions are most likely to lead to reward?

A second idea would be modeling dominance hierarchies in primates. Given a set of primate agents which engage in social interactions, and in which status changes are rated by some function of the riskiness of the animal's behavior, what stable distributions of risky behavior is the system likely to exhibit? What behavior patterns (prior probabilities of risk-seeking) select for higher status? (Clearly this would be a strongly underconstrained problem; perhaps I will learn enough to pose a particular instance of this question with some well-founded assumptions to constrain the set of free parameters.)

Here is a little MATLAB program I wrote to iterate a logistic measure of a population (from the first lecture). Here is some code to visualize the iteration space. Here are some things I played with using these tools: